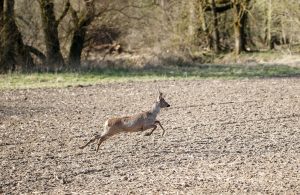 If you have ever been unlucky enough to startle a deer, you got to witness first hand that deer are fast animals.

But you are probably wondering, just how fast are they?

On average, in a sprint, a full grown deer can run 35 miles per hour.

So the answer is, quite fast. This helps deer outrun and escape dangerous predators like mountain lions and coyotes.

The exact top speed depends on the species. Below you can find a breakdown on the top speeds of whitetail deer, mule deer, and blacktail deer.

The information in this article can help you better answer the question of how fast can a deer run.

How Fast is a White-tailed Deer?

White-tailed deer are by far the most prevalent and popular deer species in North America. Anyone who lives in the Midwest and has seen them run knows they are fast.

They are know for their big white tails, which you can’t miss if you happen to jump one and get it running. 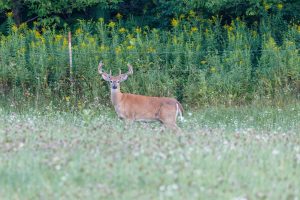 So how fast are they?

White-tailed deer have reportedly been recorded at over 40 mph.

How Fast is a Mule Deer?

Mule deer are mostly found out west near the Rocky Mountains and are believed to have evolved from the black-tailed deer.

On average, they are large deer with big ears (like a mule) and noticeably bigger bodies 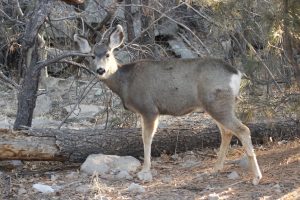 Despite the fact they are known for pronking, they can still run when they need to.

Even though Mule deer are bigger on average, they fast. Mule deer can reportedly run around a maximum of 35-45 mph.

How Fast is a Black-tailed Deer?

Blacktail deer are the smallest of the 3 species of deer discuss in this article.

They can be found along the Pacific coast of the United States, from California all the way up into Alaska.

But just because they are smaller doesn’t mean they are any slower. Although exact values are not know, it is believed they can run as fast as 40 miles per hour.

Many hunters believe they are the most difficult species of deer to hunt. This is normally attributed to the difficult terrain and their elusiveness but likely also has to do with their speed and quickness.

What Makes a Deer So Fast

The muscle types in mammals can be broken down into two types.

Type I muscle fibers are commonly referred to as slow-twitch. They are generally associated with high endurance, low power capacity, and are resistant to fatigue. So, they are good for running moderately for long distances

Type II muscle fibers can be further split into two more types but to summarize, both are capable of producing more power and are not as resistant to fatigue as Type I. 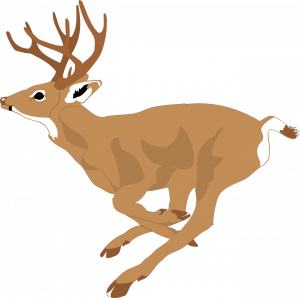 Studies have looked at the muscle fiber type in antelopes and deer and have found the predominant fiber type in both species are Type II, meaning they can produce tremendous power and speed.

More information about how muscle fiber types correlate to animal characteristics can be found in this study.

How fast can a deer run compared to humans?

In an all-out sprint, a human has virtually no chance of catching the deer. The fastest sprinter on earth, Usain Bolt, can reach top speeds of 27 miles per hour. This is over a distance of 100 meters and still doesn’t match how fast a deer can run. 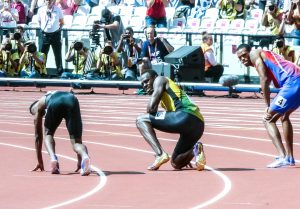 While deer can reach speeds of 35 miles per hour over short distances, some believe it is possible in theory for a human to outlast a deer in a test of endurance.

In the book Racing the Antelope, author Bernd Heinrich deeply explores the antelopes amazing running ability, and how humans evolved to become the best endurance runners on the planet.

Based on his thoughts, some think if given a long enough distance, a human could outlast a deer.

If you are interested in testing this out yourself, all I can say is good luck but I won’t be joining you.

How High Can a Deer Jump?

Thanks to those fast twitch muscle fibers discussed above, deer are excellent jumpers. 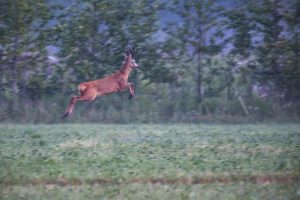 This is pretty remarkable when you think about it. Next time you are near a basketball hoop, try to picture yourself jumping over the hoops. Yea, no chance right?

If you are wondering how deer managed to get inside areas with tall deer fences, now you know.

How do deer speeds compare to other animals?

Now that you know deer top out around 35 mph, you might be wondering how this compares to other animals.

We are going to look at the top speeds of mountain lions, coyotes, and horses for comparison. 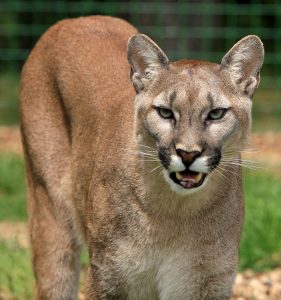 Mountain lions are the apex predator where most deer reside in the United States. The hunt mainly by ambushing their prey, waiting for and stalking until they see their chance. Amazingly, mountain likes can reach a top speed of 50 miles per hour!

This makes them extremely dangerous and successful hunters since they have the ability to outrun their prey. A deer only has a chance if it notices the lion before it has the chances to pounce and take tight trails that the lion will have trouble with. 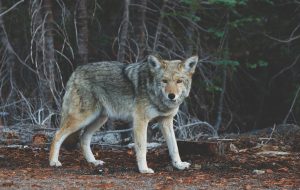 Coyotes are another deer predator but unlike the mountain lion, they generally hunt in packs. They prey on outnumber and surrounding their game since they are relatively small (~40 lbs.) compared to deer.

Coyotes can sprint around 40 miles per hour, making them about equal to or slightly faster than most deer.

With both mountain lions and coyotes being faster than deer, it makes sense why deer have evolved to be so timid and always seem to be on high alert. 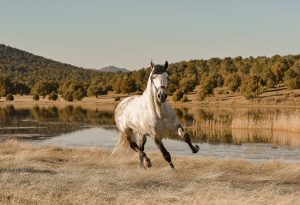 How fast is a horse? Can they outrun a deer?

A horse can top out at close to 55 miles per hour when sprinting! They are very fast!

On top of their sprinting ability, they have the ability to sustain about 30 miles per hour when galloping.

So yes, a horse can outrun a deer in a sprint.

With that said, a horse isn’t as quick and agile as a deer and wouldn’t have a chance as catching on in the woods. A deer is able to evade its prey by combining top speed, the ability to quickly change direction to brush and trees, and because they have excellent hearing.

Why can’t deer avoid cars if they are so fast?

Since deer are so quick and fast, naturally you might wonder why deer get hit by cars so frequently.

In fact, there are over 1 million deer-vehicle collisions each year in the United States, resulting in about $1 billion in property damage.

Well, it turns out this has been studied by the University of Arkansas and the conclusions are still unclear.

There is the familiar saying “deer caught in the headlights” and this seems to be the main cause. 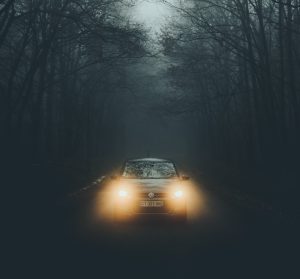 There are two times when accidents with deer are elevated:

1) In the fall during hunting season

The reason so many accidents happen at night has to do with how deer see. When a cars headlights hits their eyes, they become completely dilated and the deer is no longer able to see.

This causes the deer to freeze up and get hit by speeding vehicles.

The other likely factor is that there just happen to be a lot of deer located near roadways so it is just bound to happen.

Most full grown deer top out around 35 miles per hour. They are faster than humans but not as fast as some common predators. They are able to survive because of their elevated senses, speed, quickness, and jumping ability. So the next time someone asks how fast can a deer run, you have the answer as well as a bunch of interesting facts to share.