So, you are new to rabbit hunting. Maybe you have went a few times and haven’t had much luck.

It is possible that you may not be aiming at the correct area on the rabbit.

First things first, where and how you aim at a rabbit is going to depend a lot on the weapon you are using.

Where to Shoot a Rabbit with a .22

When hunting rabbits with a small caliber rifle like a .22, it is generally best to aim for the head if you can get a good shot at it.

With the .22 you want to make sure you are as quiet as possible. The easiest shots you are going to get are when they are standing still. If you stalk quietly, you can get off great shots when they are sitting in cover.

You should have no trouble with taking accurate head shots out to 50 yards, possibly further depending on how good of a shot you are.

CCI mini mags are a solid choice as far as ammo goes. Either the solid or hollow point will work just fine.

Where to Shoot a Rabbit with a Bow

Since you are going to need to be ready to draw, aim, and release quickly when hunting rabbits, you might want to consider a lighter draw than you use for heavier animals. You might be drawing often and you don’t want to become so fatigued that it affects your aim.

You won’t have long to shoot, and you almost certainly won’t get more than one shot. Once they think you are after them, expect them to hit the gas. If you have only startled them, they will often run some distance then stop. This is your best chance to take a stationary shot.

When you draw, aim for the body just behind the front shoulders, just like you would on a deer or other large game.

As far as which type of arrow to use when hunting rabbits, you are going to want to use either rubber blunts or judo tip like these below.

Be prepared that if you do not kill the rabbit with your first shot, the rabbit may not go quietly. Take this into consideration when going with children or anyone else that might be sensitive to this type of experience.

Where to Shoot a Rabbit with a Shotgun

Hunting and shooting rabbits with a shotgun is quite a bit different than with a bow or rifle. The general approach is that you are going to flush out the rabbits from their cover and take a shot at them while they are on the run.

This means you are not going to aim directly at them but actually slightly in front of them. You want to lead them.

Aiming this way can take a bit to get the hang of so don’t be discouraged if you miss your first few shots. When you aim, aim slightly in front of their front feet. It is better to shoot slightly low than too high because you still have a chance of hitting them if the bb’s bounce off the ground. 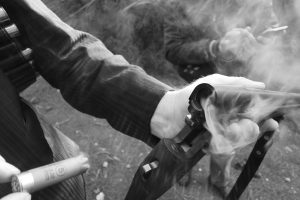 The common consensus is that #6 shot is the best for hunting rabbit. If you go any smaller then you will be picking more bb’s out of the meat. #4 shot would be a reasonable choice as well.

Now you should have an idea where to shoot a rabbit depending on what you are hunting them with. Now it’s time to get out there and try it out!