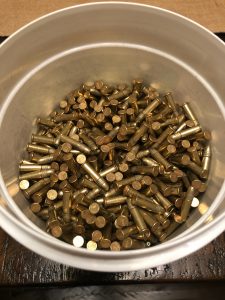 Aside from it being illegal in many areas, there are other reasons why it isn’t the best idea to hunt turkey with the rifle from your boyhood.

Reasons to Think Twice Before Hunting Turkey with a .22

Another risk that comes with shooting a turkey with a .22 is that you may not kill the turkey in a clean manner. You may not even kill it at all and wind up wounding or crippling the bird.

A .22 is meant for shooting targets and small game like rabbits and squirrels. Just by looking at a .22 round, you should intuitively get the feeling that it isn’t the right caliber for the job.

Shooting, wounding, and not recovering an animal is one of the worst outcomes a hunt can have. Hunters have an ethical responsibly to harvest the animals they hunt in a humane manner.

Rifle rounds travel a lot further than shotgun rounds used to hunt turkey. This means you need to be a lot more conscious of the backdrop behind what you are shooting.

Hunting turkeys with a rifle on public land can be especially dangerous. Most turkey hunters are heavily camouflaged so the chances of being seen by other hunters are low. 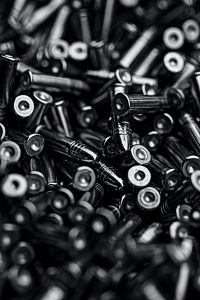 Where to Shoot a Turkey with a .22

So, assuming it is legal to use a .22 in your state and you still want to do so despite the warnings above, you should at least know where to aim.

There are two common opinions when it comes to where to shoot a turkey with a rifle.

If you are going to shoot a turkey with a .22, the best place to shoot it is in the head. A well placed shot to the head will produce a quick and clean kill.

This issue is that turkeys are constantly moving there head in what seems like a random, sporadic pattern. This can make it tough to get a clean head shot.

You will hear other hunters argue it is better to aim for the vitals with a .22. Search around the internet and you will find many stories of turkeys being shot in the body with a .22, often multiple times, only for them to fly off and never be found.

If you want to aim for the vitals, aim right behind where the wings attach to the body.

Alternatively, if you can get a clean shot at the base of the neck, this will produce a quick and clean kill.

.22 rifles are great for hunting small game like small birds, squirrels, rabbits, snakes, and raccoons. For larger game you should consider a different weapon choice.

What ammo should I use for turkey with a shotgun?

We recommend you use No. 5-6 shot. Checkout our article on what shot to use for turkey for specific recommendations.

What should I use to hunt turkey instead of a .22?

A shotgun is a much better choice for hunting turkey. It is much more beginner friendly. You can also add accessories like a red dot scope to help you with putting clean, consistent shots once they are in range.

What else can I hunt turkey with?

Two other good options for turkey hunters are bows and crossbows. Both are very popular and have about the same effective range as a shotgun.

We don’t recommend hunting turkeys with a .22. If it is legal in your state and you want to hunt with a rifle, use something a bit larger like a .223. Be aware of the additional risks associated with rifle hunting turkeys. Although they are birds, turkeys should not be thought of as small game and should be hunted accordingly.