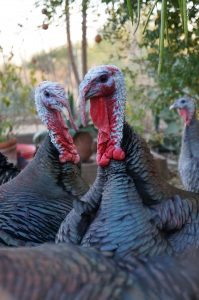 Today’s article is going to answer the question “What is a group of turkeys called?”

You may have heard a group of turkeys referred to as a flock, rafter, gang, or gaggle.

But what is the difference between these?

Are they all correct?

By the end of this post you will be able to answer these questions and know what to call different size groups of turkeys.

Throughout your life, you may have heard groups of turkeys called many different names.

Now we will discuss some of the most common (and correct) names.

Later in the article we will go through a few examples of names people call a bunch of turkeys that are actually incorrect.

Have you are heard of someone say a “rafter” when referring to a group of turkeys?

This name has an interesting origin as we will discuss more below but for starters, a rafter is a correct way of talking about a group of turkeys

How many turkeys are in a rafter?

While some people think a rafter of turkeys needs to have many birds in the group, there is no official number required.

Technically a rafter of turkeys can mean as few as 2 turkeys together. 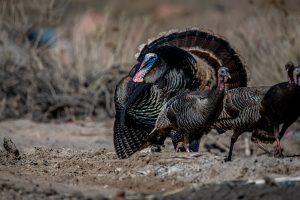 The next common (and correct) name for a group of turkeys is calling them a flock.

It is almost a guarantee that you have heard this term before, probably when someone was pointing out some type of bird.

The technical definition of flock is “a group of birds herded together”.

It actually doesn’t only apply to birds. A flock can be referring to any group of animals.

How many turkeys are in a flock?

There is no set number associated with the word flock. It can mean a large or small group of any type of bird (or animal). 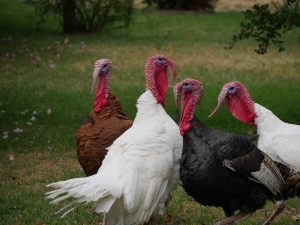 Gang is often used to describe groups of people.

But it can also be what a group of wild turkeys are called!

While it is not nearly as common as rafter or flock, it can be used nonetheless.

How many turkeys are in a gang?

Similar to a flock of turkeys, a gang of turkeys has no defined number of birds in the group. It can mean anything from a few to a whole group of 30+.

Where did the term Rafter of Turkeys Come From?

Why do we call a group of turkeys a rafter?

When a building like a house or barn was being built, wild turkeys would often be found roosting in the rafters of the building. 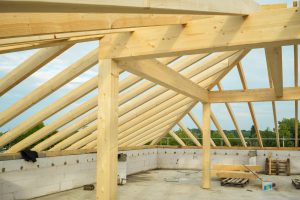 This is a great place for them to sleep because it is up and out of reach from predators.

Every night wild turkeys will roost in an elevated spot like a tree while they sleep.

Building rafters are no different from a tree from the turkeys perspective.

They are simply a place for them to stay safe.

When morning comes, turkeys come off the roost and go about their day, feeding and migrating.

So, that’s the story behind it. People started finding groups of turkeys in building rafters and then started referring to them as “rafters of turkey”.

What Not to Call a Group of Turkeys

There is one term that often gets used when describing a group of turkeys that is completely incorrect.

And that is a…

A gaggle is a term used to describe a group of geese, not turkeys! 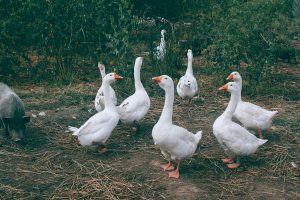 While they are both birds, it doesn’t mean all naming conventions apply.

The term gaggle has actually been used for hundreds of years.

But it has never been correct to call a group of turkeys a gaggle.

What are Baby Turkeys called?

How many turkeys are usually in a group?

You may have heard the phrase “turkeys of a feather flock together.” Well, this is because turkeys are known for sticking together. It is common to see groups of male and female turkeys in numbers of anywhere from 30-50 turkeys at a time. It is possible for the numbers in a group to be even large, extending into the hundreds.

What is a Male Turkey called?

An adult male turkey is called a gobbler. A male turkey becomes a gobbler once they turn 2 years old. Male turkeys younger than this are called Jakes.

What is a Female Turkey called?

A female turkey is called a hen. But technically, this only applies to adult female turkeys. If the turkey has not reached adulthood, young female turkeys are referred to as Jennies.

How many Types of Turkeys are there?

There are 6 types of turkey species.  They include the following:

Do groups of turkeys fly together? 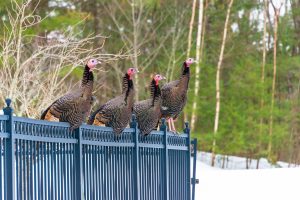 Do groups of turkeys roost together?

Yes, as was discussed above, the term “rafter of turkeys” originated from groups of turkeys roosting together in rafters of buildings under construction. It is typical for turkeys to roost fairly close together.

How far can turkeys see?

Turkeys have great eyesight. They have 3x better eyesight than humans and can see as far as 2-3 miles under the right conditions.

So, the next time someone asks “what is a group of turkeys called”?

You will know the answer. Well, actually, now you know a few answers.

Whether they are called a rafter, flock, or gang, they are all correct.

And importantly, you know what NOT to call them (a gaggle).

I hope you found this article helpful. If you are interested in learning more about turkeys, checkout our page on turkey hunting.