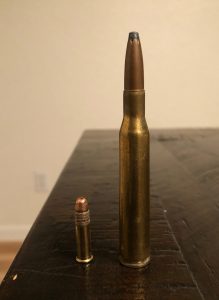 This is a common question we hear from inexperienced hunters.

Well, this may not be what you want to hear, but our answer is:

No, you should not hunt deer with a .22. Not only is it unethical, it is also illegal is most states in the U.S.

There are far better calibers to choose from that are much more effective at producing clean kills.

Why You Shouldn’t Hunt Deer with a 22

Sure, you can kill a deer with a well placed shot from a 22 but just because it’s possible doesn’t mean you should. Many deer have been killed by a 22. But how many have been shot and weren’t recovered?

The only state we are aware of that allows using a caliber this small is North Carolina.

Hunting deer with an illegal caliber likely carriers a hefty punishment, and for good reason.

Most states require that hunters use a minimum centerfire caliber of .243.

Using a .22 for deer significantly increases the chances that you wound a deer that you will be unable to recover. Countless deer have been crippled by hunters using a .22.

The worst possible outcome for any hunter is to shoot, wound, and not recover their game. Not only do you not recover the deer but you cause the deer unnecessary suffering in the process.

We don’t even recommend hunting smaller game like turkeys with a .22.

Much like shooting a deer in the head, there are much more humane ways to hunt.

If you are going to hunt deer, do so responsibly in a way that will produce clean, ethical kills.

Smallest Caliber You Should Use for Deer

The smallest caliber for deer is the .243 Winchester. Even with a .243, shot placement is very important. If the deer is within range of your gun you shouldn’t have much issue making a clean shot behind the front shoulder.

For comparison sake, let’s compare the difference between a typical .22lr and a .243 bullet designed for deer.

At 100 yards, the amount of energy the bullet is carrying has dropped to 85 ft-lbs.

Many hunters will give the rule of thumb that the minimum energy recommended for producing clean kills on deer is somewhere between 1000 ft-lbs. and 1300 ft-lbs. While we don’t disagree that clean kills can result from a well place shot with less energy, this is a decent performance ballpark to shoot for.

We see no reason to hunt deer with a .22 when a good hunting rifle can be purchased for under $400. 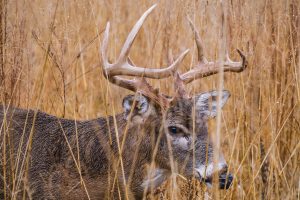 We don’t think you should hunt deer with a .22. The only way we would consider using a .22 to kill a deer is if we were lost in the woods, starving, and a .22 was all we had.

There are many better options out there nowadays. Do yourself a favor and get something more suitable for large game.